Tom Osborne is best known as the former head coach of the Nebraska Cornhuskers. Osborne was the head coach from the 1973 season until 1997, and led the Huskers to 13 Conference Championships and three National Championships.

His 255-49-3 record gave him the best winning percentage (83.6%) among active NCAA Division 1-A coaches at the time of his retirement and the fifth-best of all time. Osborne was inducted into the College Football Hall of Fame in 1999. In 2000, he received the Jim Thorpe Lifetime Achievement Award.

As a college football coach, Tom Osborne was respected by his peers, and that legacy continues to the present time. His second National Championship team, in 1995, is widely regarded as the best college football team in history, and especially in the modern era. The team won by an average score of 52-14 in the regular season and beat four top 10 teams (as ranked in the final polls) by an average score of 49-18. The team crushed second-ranked Florida in the Fiesta Bowl 62-24.

Now as a motivational speaker and author of his memoir Faith in the Game, Osborne lets us in on the traits required for successful life management and teamwork – loyalty, perseverance, honesty, integrity, strategy, character, faith, and old-fashioned “sweat equity” – values it takes to achieve victory, on any field. 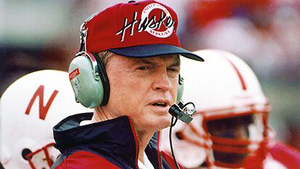