Joseph’s new show is not “just an impersonation show” – Joseph portrays the energy, the moves and the voice of Elvis.

Joseph made it into the Top 10 of NBC’s America’s Got Talent (season 3; 2008) as a “Young Elvis” impersonator. He did so well that he won the judges’ vote (David Hasselhoff and Piers Morgan). Following his success on AGT, Joseph went on tour (U.S., Europe and Mexico) and finally made Branson his performance home in February of 2010. He’s had a wild ride and puts 110% into every performance – just like Elvis did.

In 2006, Joseph dressed up as Elvis for a Halloween Party. A huge Elvis fan at the party asked him if he could sing and dance as Elvis – and if he did, she’d pay him to perform at her bar. Joseph gave it a whirl, and before he knew it, he was being asked to perform at more events in his hometown of Lincoln, Nebraska. It didn’t take long for him to decide he loved what he was doing, and to go for it as a full-time endeavor. In addition to his success on AGT, Joseph also performs in the world-wide Elvis competition at Graceland, The Ultimate Elvis Tribute Artist Competition sponsored by Elvis Presley Enterprises, Inc.

Joseph does all Eras of the King, which was also the name of his show during his first season in Branson at the Historic Owen’s Theater. Suspicious Minds is always a crowd favorite. 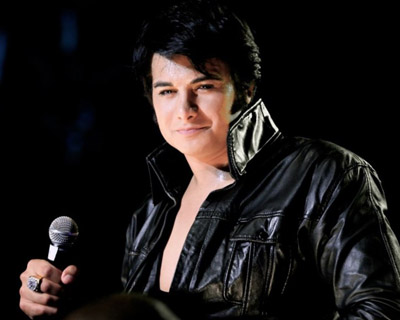