Never Fair Catch! What It Means To Be Fearless In Your World!

Millions of people around the world watched Johnny Rodgers’ sensational 72-yard punt return during the Nebraska vs. Oklahoma Game of the Century in 1971. Voted Most Valuable Player in the history of the Big Eight Conference and named by Sports Illustrated as Husker Player of the Century, Johnny was inducted into the College Football Hall of Fame in 2000.

Now with the historic perspective of 40+ years of more championship games and awards including the Heisman Trophy, Johnny’s high-performance records place him in a unique position to help others unleash their ultimate potential. Using sports metaphors to teach his audiences how to go within so they won’t have to go without, Johnny advocates teamwork, mental toughness and the Heisman factor.

“You can learn a lot about a man by his hands, by how they look, what they reach for, and what they hold while in the limelight and after it fades away. Their commitment continues to lend a hand to lift spirits, to teach, to give, to serve and to sacrifice. The men who hold the trophy up have gone on in life to uphold the values it embodies, the determination, the duty and integrity.”

“Never Fair Catch! What It Means To Be Fearless In Your Life”
(From the Over-the-Top Presentation Series Specifically for Business Leaders, Entrepreneurs, Sales/Marketing Professionals, and Youth Groups)

Using actual film footage and relevant personal stories on and off the football field, Rodgers shows his audiences that it’s not how fast you get there, but that timing is everything, and it’s that you get there that counts. He says, “Don’t out-think yourself…sometimes it’s not about thinking it’s about following your inner-self and just reacting to situations as they come. You have to be in sync with your teammates because everybody has got to get a block.”

Rodgers reveals 11 competitors such as fear, ego, jealousy, laziness, etc. that must be blocked on every play. Audiences will quickly recognize the real challenges standing between them and their goal line.

This presentation is informative and entertaining as Rodgers easily builds rapport with audiences. Knowledge of the game of football is not a prerequisite. Non-sports fans will gain equal lessons in the areas of risk reduction, ways to increase their odds, and new rules of engagement for building better alliances with others.

In this presentation, you will learn:

10 Minutes of Insanity: The Johnny Rodgers Story
An in-depth look at what it takes to overcome all odds no matter how bleak. Despite being born in poverty and with chronic respiratory problems, Johnny “The Jet” Rodgers (1972 Heisman Trophy Winner) arguably became one of the greatest college football players of all time – leaving no door unopened, seizing every opportunity that came his way. Johnny holds nothing back in telling his story, and there’s a rhyme to his reason. He sets out to leave behind the lessons he’s learned, and this book hits the mark. Johnny courageously shares his mistakes, his losses and his successes; all of which have played an integral part in developing a finely tuned process that he hopes will give inspiration and motivation to others around the globe. Buy here

An Era of Greatness: Coach Bob Devaney’s Final Four Seasons in University of Nebraska Football (1969-1972)
Interviews with players, coaches, sports broadcasters, trainers, opponents and others give insight into the chemistry on the field, in the locker room, and in practice. An Era Of Greatness contains stories about the great characters of Nebraska football from the men who were the Nebraska Cornhuskers of 1971. Buy here

“Johnny Rodgers was the spotlight of our event! He did a great job and people were definitely excited to meet him! The level of excitement generated by his presence could be felt by everyone. His speech was inspirational to those young and old. I don’t think there was a single person who didn’t walk away from this event without feeling the Husker Power generated by Johnny’s presence! This year we were able to raise enough funds to add an additional scholarship. Thank you, Johnny The Jet for making this year’s event the biggest ever!”
Ashley Lantz, Vice President, Siouxland Huskers

“Wow! Congratulations on such a successful event. A packed ballroom and so many of our companies represented. I thought that Johnny Rodgers was such an inspirational speaker on the Heisman experience. The room really got so motivated by hearing him equate his experience with leadership, mentoring and teamwork. The crowd was so interactive throughout the event that I didn’t want to leave. Congrats on a great event!”
Brian L. Wolff, Senior Vice President, External Affairs, Edison Electric Institute

“Our organization was very happy when we found out Johnny The Jet Rodgers was coming to Ponca. Johnny is genuinely personable. He came early to our event and took the time to talk to anyone who approached him. I think by the end of the night everyone that attended had done a Heisman Pose with Johnny! The purpose of our event was to complete our fundraising goal. We are a community that raised $1.2 Million in less than three years to build a sports complex for our school and community. It was raised by donations from alumni and community members. Johnny’s speech was focused on teamwork. He talked about the events in his life that led up to him playing at Nebraska, how important his team was and like our community…success doesn’t come without working together. I believe he helped us reach our goal that night. Ponca would have him back to our community in a heartbeat!!”
Patti Boyle, Ponca Community Sports and Recreation Complex Committee Members

“Our event, The 2012 Business Opportunity Conference, was taken to a higher level by Johnny’s participation. Johnny provided motivation, encouragement as well as entertainment for corporations and diverse businesses alike. He shared his experience with an energy and clarity that everyone appreciated and applauded! Heisman voters made a great choice in ‘72. Thank you, Johnny Rodgers.”
Bryan Umstead, Duke Energy, Carolinas Minority Supplier Development

“At our annual lead Getters Luncheon, Johnny inspired, motivated and entertained the crowd with a wonderful talk entitled, Teamwork Makes the Dreamwork. He spoke about how his teamwork experience while a member of the Nebraska football program helped achieve his dreams of winning a National Championship and being selected as the Heisman winner in 1972 despite many odds. Johnny spoke from his heart about his life with great passion and honesty. He’s a dynamic speaker and very interactive with the audience. The crowd was amazed by his talk and everyone was on their feet at the end of the speech. The event was a huge success!”
Lori Vanderheiden, President/Owner, 1 Staff Training & Consulting, Omaha Executive Association Board Member 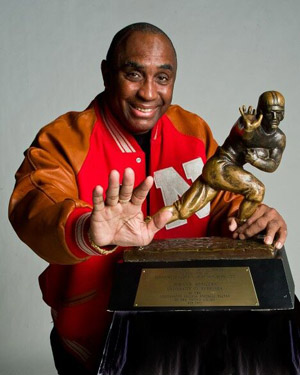