Joe Torrillo was a 25 year Lieutenant with the NYC Fire Dept. who is now retired on disability. He spent the first 15 years of his career in Engine Company # 10, across the street from the South Tower of the World Trade Center. While recuperating from a severe injury on New Year’s Eve of 1996 going into 1997, Joe was assigned to convalesce in the office of fire safety education.

Eight months into this light-duty position, Joe was ultimately named the Director of this public-based program. In his new position, Joe would co-design a children’s state-of-the-art fire safety learning center, which opened in October 2000.

This new venue, The Fire Zone, in the heart of Manhattan, was nominated and won the coveted THEA award at the Emmy’s in 2002. Shortly thereafter, in January of 2001, Joe worked on a project with Fisher-Price Toys to help design a new children’s action figure, which was part of their line of Rescue Heroes. This new action figure was named Billy Blazes and was a likeness of an NYC Firefighter, who was an addition to their other Rescue Heroes.

In conjunction with the Executives of the Fisher-Price Corp., Joe chose the Fire Zone as the location for the press conference to introduce Billy Blazes, and then keeping with a safety theme, ironically chose the date of September 11, 2001, because 9/11 is the Emergency phone number in New York City.

On the way to the press conference, that was set for 9 a. m., Joe was about an eighth of a mile away from the World Trade Center, when American Airlines Flight #11 struck the South Tower at 8:46 a.m. Fearing for his Firefighter brothers in Engine Co. 10 and Ladder Co. 10 across the street from the Towers, Joe diverted to the scene to render assistance.

Three minutes after donning borrowed bunker gear, at 9:03 a.m., the second jet flew over Joe’s head and slammed into the South Tower. With a background in Structural Engineering, Joe made an immediate assessment that everyone above the fire was doomed to death, and the buildings would collapse.

While Joe was involved in the rescue operation, the South tower fell at 9:59 a.m. Joe was buried alive with a fractured skull, broken ribs, broken arm, crushed spine and heavy internal bleeding. Shortly after being found alive in the rubble, they removed Joe on a long spine board and placed him on the deck of a boat on the Hudson River, with the expectation of getting him to a hospital.

As emergency personnel were holding his split scalp together, the North Tower fell and buried Joe alive again. He was alone in the engine room.

About 45 minutes later, Joe was once again rescued from the debris and taken across the Hudson River, where he awoke in a hospital room at the Jersey City Trauma Center in New Jersey. Because he was wearing a borrowed set of firefighting clothing with the name Thomas McNamara, Joe was misidentified by that name, and Joe was declared missing for three days.

By the time the sun set on the evening of September11, 2001, Joe had miraculously survived the collapse of both Towers, but with life-long injuries.

“Buried Alive with the Will to Survive”
From Devastation to Inspiration
The lessons Joe learned on and after September 11, 2001, inspire attendees to thrive through change under any circumstance and to accept and handle unexpected stress and adversities – redirecting them with positive empowerment toward reaching their goals and dreams. Attitude and perseverance are everything.
**This program will be customized by Joe to meet your goals for the session.

“Teamwork Now More Than Ever”
In a weak economy, with constant threats of downsizing and layoffs, human behavior will fester in many different ways. Competition has always been the name of the game and will always be what most employees consider their path to job security. Joe inspires all levels of employees to keep a “Team State of Mind” in all of their projects and job duties. Attendees leave this session with a renewed sense of their important individual role as a part of the Team!

“Putting the Spark in Your Fire”
This is a corporate-focused presentation focused on bringing all levels of employees and managers together, and re-identifying the intent of a person being dedicated to his or her work or job. Joe parallels his own career as a 25 year Lieutenant with the NYC Fire department as both a labor leader and an upper manager. The end result has “the workers” and “the boss” recognizing and appreciating each others’ contribution to the efforts of the company.

“Prejudice, Stereotyping & Discrimination”
The “key point” of the presentation is to remind everyone that stereotyping, in general, is not the issue, but more importantly, it’s how we react to stereotyping – which can be a huge problem. Joe will give explicit examples of stereotyping and will prompt audience participation. This presentation will be sure to teach the skills that may prevent incidents where a person alienates another, ultimately ruining potential relationships or windows of opportunity. The audience will leave the presentation fully comprehending that those who do the most for us in life, are usually those that we least expected. The moral to the story is: Treat everyone equally, because you’ll never know who your heroes in life will be.

“The Price Tag of Greed, an Overview of a Chutes & Ladders Life”
Joe was a poor kid from an Italian ghetto in Brooklyn, New York who was exposed to a life of crime as a young kid. Instead of following in the footsteps of gangsters, he earned his way into the most accomplished and respected organizations in the world, the New York City Fire Department. Hear the stories of people of fame and notoriety who threw it all away for the sake of illegal and immoral actions. Using simple arithmetic, people will be amazed at how devastating costly greed inflicted mistakes can be.

Everyone from the Mafia to missionaries will be discussed, and attendees will think not twice, but a hundred times, before they themselves fall to errant ways. The final message to the audience is simple: It can take a lifetime to build a reputation, but you can lose it one split second.

“I had the privilege of meeting Joe in September of 2011 when he graciously agreed to appear in our pregame ceremonies as we paid tribute to those who perished on 9/11. It was also a ceremony honoring those who have, and continue to serve our country in the military. Joe assisted us with several media interviews and was absolutely outstanding with the requests we put forth. His experience from that dreadful time, combined with his passion, articulation, and optimism made for a tremendous presentation to members of the media. Joe also captivated a large group with a special presentation regarding his 9/11 experiences for one of our season-ticket holders during his visit to Southern California. I truly hope we have an opportunity to work with Joe again in the future. It would be both our pleasure and privilege.”
Tim Mead, California Angels Baseball

“The San Diego County Fair invited Joe Torrillo to be a speaker on the Grandstand Stage for our annual 4th of July ceremonies. The 4th of July at the San Diego County Fair is a huge tradition for the community of San Diego County with over 85,000 people attending the festivities. From start to finish, you cannot find a speaker who is more professional, charismatic and committed than Joe Torrillo. We were delighted to host him at our event. His speech about patriotism in the United States was extremely moving and a wonderful way to kick off the evening for the thousands who witnessed his words on July 4, 2012. We are hopeful that Joe will be available for our event again in 2013. I would highly recommend his services to any organization looking for an authentic, dynamic speaker whose words will ring true to anyone of any demographic.”
Katie Phillip, San Diego County Fair

“In our search for a speaker who was a survivor of the attack in New York on September 11, 2011, we found Joe would reveal a miraculous story of survival to the people of Annecy, France at a conference for Pulmonary diseases. Freelung, the not-for-profit French Organization that plans on offering free lung treatment for the victims of the attack on the World Trade Center, greatly benefited from his amazing speaking skills. Our biggest problem is handling and sorting all of the requests to have him return to speak again.”
Dr. Karim Berkani, Pulmonologist in Annecy, France

“Keynote speaker, Joe Torrillo, brought such a presence to the Nixon Library on September 11, 2011, when he spoke about the tragic events on 9/11. The audience was spellbound and deeply touched by his personal account of what occurred and humbled by what one man can endure and still survive. It was an honor and an inspiration to hear and meet Joe and something I will never forget.”
Mayor Nancy Rikel, Yorba Linda City Council

“Memory is a very fragile gift. Experiences that were once understood and deeply felt fade in the torrent of so many other remembrances. Joe Torrillo has devoted much of his academic and emotional life to remembering. For him, he was an NYC Firefighter who was part of a disappearing survivor of 9/11. His values today focus on keeping the terrible experiences alive for his fellow citizens. Joe presents in a clear, meaningful, and informative way that captures the audience.”
Professor Stuart Verstanding, Sy Syms School of Business, Yeshiva University

“Lieutenant Torrillo was so inspiring. Students gave him a standing ovation after they sat respectfully for 40 minutes listening to his courageous story of heroism. I was most impressed that he wove throughout his story the very important message of how students can be heroes every day by spreading kindness to other people.”
Burt Smith, Principal, Shepton High School, Plano, TX

“I had the good fortune of having Lt. Joe Torrillo address my Community Prayer Breakfast in Brigantine, New Jersey. I can personally attest to Lt. Torrillo’s ability to captivate his audience with his experience as a New York City firefighter on 9/11. Somehow he was even able to sprinkle just the right amount of humor into what we all know to be a difficult and somber topic. I found Lt. Torrillo to be very accommodating and willing to go out of his way to help make my event successful.
Andy Solari, Brigantine, NJ Community Prayer Breakfast

“For the past five years, the Del Mar Fairgrounds and San Diego County Fair have had the honor of working with the World Memorial organization and welcoming Mr. Joe Torrillo to join in our 4th of July celebrations. Mr. Torrillo has been an absolute delight to work with and has become a 4th of July highlight at the Fair, drawing a standing ovation after every speech. Joe is simply the best in the business and we look forward to working with Mr. Torrillo for many years to come!”
Nicola Bysouth Martinez, Exhibit Supervisor, Del Mar Fairgrounds 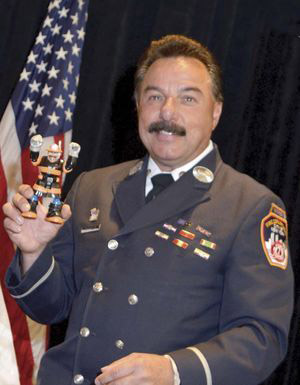