NO EXCUSES – CHOOSE YOUR ATTITUDE

Jim Weeks was born and raised in southeast Nebraska. He and his wife, Kim, have five children.

Both of Jim’s parents were teachers and he knew at a very young age he wanted to be a teacher and a coach. His successful experiences in teaching and coaching have led to a passion for learning and sharing everything he can about leadership, and in helping others explore the steps to accomplishing their own personal goals and dreams!

Much of what Jim has learned about leadership and achieving goals has come from his coaching experiences. Jim assumed the Beatrice head coaching duties in 1989 and turned around what had been a very unsuccessful program. During his tenure at Beatrice, Jim built one of the finest basketball programs in the state. He led Beatrice to 15 State Tournament appearances, 13 Final Fours, three State Championships and three State Runner-Up finishes. In his last 18 years at Beatrice, his teams were rated in the top five in the final Class B rankings 17 of those 18 years! During that time, Jim posted over 441 career wins…an average of 24.5 wins per season…and won several Coach of the Year awards. In his time at Beatrice, Jim also helped coach the Orangemen track teams to five State Championships.

In his first year at Doane, Jim’s Tigers were a pre-season pick to finish 10th of 11 teams, after finishing dead last in the conference the year before. However, under Jim’s leadership, they won 21 games, which tied the best season Doane basketball has ever had, and they ended the season 4th in the conference. Not only that, but during the season they were rated as high as 8th nationally, and to give you a point of reference, in the history of the Doane basketball program, they had never been rated in the top 20 nationally, let alone in the top 10. While at Auburn High School in a six-year period of time he and his teams have won three state championships and one state runner-up.

Jim puts on leadership seminars and has conducted Leadership Academy’s for groups. He’s been invited to speak at numerous coaching clinics, service clubs, athletic banquets, businesses, organizations, and associations. Jim absolutely loves to fire up and motivate people to realize their own potential and establish a plan to reach their goals!

Jim has developed his own system of strategies and teaches people how to implement these strategies, as well as develop habits that will help them become higher achievers. These strategies can be molded and personalized to apply to any individual, organization, business, or team. Jim bases his strategies on his personal philosophy of NO EXCUSES – DON’T BLAME OTHERS – CHOOSE YOUR ATTITUDE.

“Difference Makers, Super Achievers & Legacy Leaders”
Why we need to be one and how to become one.

“On a Mission…What’s Yours?”
Doing what matters to you, that only you can do!

“Learning from Criticism, Adversity & Your Failures”
How to respond and use mistakes to succeed.

“Average Leaders Communicate, Strong Leaders Connect!”
The #1 skill in effective leadership and in building relationships is the ability to connect.

“Jim Weeks addressed our entire school staff recently. He was very inspiring and thought-provoking! The comments from the staff were extremely complimentary! He does a phenomenal job of pushing the envelope of leadership. He is not afraid to make you think about yourself as a leader and what it takes to become GREAT. I would highly recommend Jim Weeks if you want someone that will make your organization better. He tells it like it is and he lives it like he tells it!”
Aaron Plas, Assistant Principal & Athletic Director, York High, York, NE

“Coach Jim Weeks spoke at our District 9 FCCLA Leadership Conference in Greeley, Nebraska. I must say we were very pleased with Coach Weeks! We appreciated that he asked the students to take notes and also provided them with a handout to follow along. His message on leadership was wonderful! It was so great of him to present a breakout session also. The evaluations from students ranked him 4-5 on a scale of 1-5 with 5 being the highest. Thank you, Coach Weeks and MidAmerica Speakers Bureau for helping make our Conference a huge success!”
Sharon Smith, District 9 FCCLA Advisor

“Jim Weeks did a fantastic job of motivating our staff and students at Diller-Odell Jr-Sr High School! It was our pleasure to have him present as we kicked off the school year. Jim does a great job of relating success to leadership, effort and determination. His examples of having a vision and goals are vitally important for young people to understand. I would highly recommend Jim Weeks as a speaker!”
Mike Meyerle, Superintendent, Diller-Odell Public Schools

“You do not want to attend one of Jim Week’s presentations if you just want to go through the motions and not be challenged. However, if you want to be pushed, stretched and forced to really evaluate your performance, find career break throughs and eclipse the barriers that have held you back, then jump in the deep water with Jim. It will be an emotional, life-changing experience for you.”
Don Meyer, 2009 ESPY Award Winner

“Mr. Weeks recently spoke at our school and did three different presentations addressing the student body, teachers and staff, and the community. I had the opportunity to attend all three. Coach Weeks is a riveting and engaging speaker! I appreciated how he gave practical ways to implement what he taught into everyday life…from spending 15 minutes a day on something you want to improve, to whom you surround yourself with every day. He taught common sense; the Golden Rule; positive reinforcement, and being intentional in making a difference. The feedback I have received from both students and adults has all been very positive! I hope I have the opportunity to hear him speak again some day!”
Kim Burry, School Board Member, Bayard, NE

“Barry, I’ve received nothing but rave reviews about Jim’s presentation from everyone I’ve talked to. We felt he was a great fit for our group and had a relatable presentation at all levels of management. Thanks again for all your great help!”
Stephanie King-Witt, Director of Marketing/Public Relations, Bosselman Companies & Nebraska Danger Football 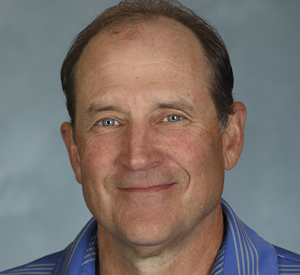