Jeff Koterba is a globetrotting creative.

Honored by the National Cartoonists Society, National Headliner Awards, and Great Plains Journalism Awards, his cartoons are syndicated to 850 newspapers and have appeared in such publications as The New York Times, The Washington Post, and USA Today.

His cartoons have flown aboard space shuttle Discovery. Back on earth, his work has been included in multiple exhibits in the U.S. and Europe, including alongside Picasso.

Entertainment Weekly called his memoir, Inklings: “…a powerful and moving portrait of an artist.”

He is the lead singer, guitarist, and songwriter for the Prairie Cats, a swing and jump-blues band that has performed around the U.S. including the South by Southwest Music Festival.

Although he has spent most of his life in Nebraska, Jeff has also lived in Austria for two years, where he drew his cartoons for the World-Herald from the Alps. He has participated in the Global Forum on Cartooning in Paris and has recently begun leading tour groups to Europe, including to the Czech Republic where his family is from.

Inklings, a memoir
With a pen and a sheet of white paper, Jeff Koterba was able to escape into a world that was clean, expansive, and comfortable–a refuge from the pandemonium surrounding him. A heart-felt memoir that calls to mind The Tender Bar and Fun Home, Inklings is infused with an irresistible optimism all its own. Buy Here 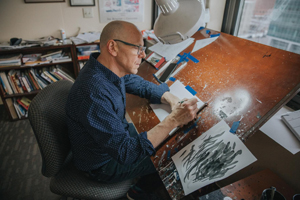