More Than Just a Magician, a Complete Entertainer!

Growing up in a family of magicians, Gayle’s first introduction to entertainment came as a child performing with his family’s traveling magic show. Since 1987, he has been performing his fresh, fast-paced solo magic and comedy act full-time all across the country. Audiences from New York to L.A., and Hong Kong, China to Cancun, Mexico, will attest that his act is truly unique and entertaining. Gayle has opened for Dan Seals and Holly Dunn, Frankie Valli and the Four Seasons, country superstar band Sawyer Brown, and Bill Engvall from the Blue Collar Comedy Tour. He also worked a series of shows with the late legend comedienne, Phyllis Diller. Gayle has appeared on HBO’s Comic Relief, and competed in Showtime’s Funniest Man in America Contest, receiving thunderous applause at both!

Gayle’s fun, interactive and “clean” presentation of magic, mind-reading, and humor is suited for every type of audience. Gayle has become known as having one of the “quickest wits in show business!” Each of his performances is special and exciting, and his college degrees in Broadcasting and Speech have contributed to his professionalism, as well as a warm and engaging rapport. Audiences are more than entertained…they are enlightened. He is a favorite at comedy clubs, colleges, fairs, banquets, conventions, reunions, trade shows and on cruise ships. The Associated Press said it best: “More than just a magician, Gayle Becwar is a complete entertainer!”

“The Power of Magic”
Gayle performs his high-energy 60-minute show with volunteers from the audience, personalizing each show to be unique to its venue. This is a great way to start off a conference or event by encouraging interaction and building connections. Bringing audience members on the stage to help perform magic encourages laughter, communication and opens minds for new ideas. Seeing the boss on stage in a shower cap, holding a toilet paper tube as his/her magic wand is definitely the ultimate ice-breaker for any event. Your guests will have something to talk and laugh about the rest of the event, guaranteed! Nothing is more powerful than magic and laughter.

“The Magic and Humor in All of Us”

“WOW! YOU WERE FANTASTIC! Thank you for an outstanding performance! I haven’t laughed that much in years. Your presentation of good, clean humor, in front of a very mixed audience, was a real hit with everyone!
Barbara Miller, Central Florida Auto Dealers Association

“Wow! Thanks for the super job you did as the closing keynote speaker. We thought we had seen the best at previous conferences, but you are definitely the best! I’m still getting phone calls and e-mails, and everyone is saying that you need to do and encore for us…and soon. You were simply dynamite!”
Patricia Gisinger, North Dakota Telephone Association

“It’s been two months since our convention and I am STILL hearing about your performance! What a unique ability you have to draw out the best in a crowd, share the punchlines, keep their attention, and make them laugh until their sides hurt.”
Karla Johnson, Louisiana Forestry Association

“I was deluged the following day with requests for your phone number, and I personally got a credibility boost for booking you!”
Shelly Sahling, Nebraska Power Association

“Gayle performed for our company’s biennial Customer Appreciation event and brought the house down! During the social and dinner hours, he did strolling magic. With 100 tables, he wasn’t able to get to all of them, but he did make sure to stop by the ones with children – all of whom were in awe of his magic! After the requisite speakers, he then took the stage and gave us a show that had everyone laughing hysterically. His humor was clean and family friendly and his magic tricks still had people scratching their heads the next day! After the event was over, several children made their way to the stage where Gayle was packing up. After spending an hour and a half doing strolling magic and 45 minutes doing his act, he then spent 30-45 minutes with these children, showing them magic trick after magic trick. I was very impressed. We would not hesitate to hire Gayle again if the opportunity arises.”
Sherry Judy, Office Manager Dinkel Implement, Co.

“Just saying THANK YOU does not seem to say enough for the great performance you gave our group. I thought your performance this year was better then the last time we saw you perform for us, if that can be possible.”
Joyce Clayton, Koch Agri Service

“I cannot begin to tell you haw many people who were in the audience expressed to me their amazement and their compliments. Your show captured their attention at the outset and kept them involved from start to finish. This is not an easy task no matter who the audience may be, but you were able to do so.”
Marshall Tofte, Nebraska Association of County Officials

“Thank you for all the great shows you did with your magic. Everyone enjoyed it very much. You are excellent! It has been a great pleasure having you on our cruise. I look forward to having you aboard the TRIUMPH again!”
Flotta Roberto, Sr. Captain, Carnival Triumph Cruise Ship 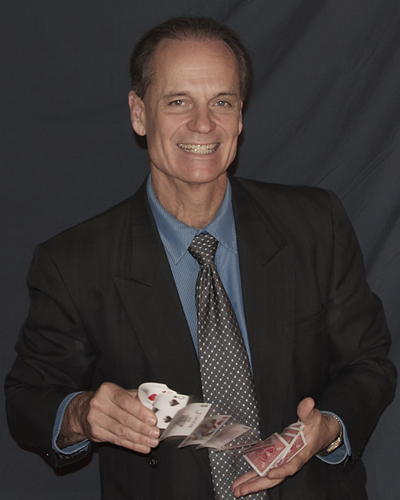