On April 15, 2013, Dr. Stavas approached the finish line of her 5th Boston Marathon. Just blocks away she heard explosions, and she ran towards them.

Arriving at the scene she went to work administering CPR, applying tourniquets, and triaging the wounded. What led her to make that fateful decision to run into a terrorist attack? An expert on chaos, Natalie Stavas attacks every obstacle with the same attitude: “You run towards that which you fear, that which challenges you, that which is oppositional.” Running toward chaos actually makes chaos more manageable.

Following these actions President Barack Obama, Katie Couric, and Anderson Cooper honored Natalie for her role as a first responder. The Improper Bostonian magazine named Dr. Stavas one of “Boston’s Best” and The Boston Globe awarded her with 2013 Bostonian of the Year – an honor bestowed upon those that shape the biggest story of the year in a remarkable way.

After the bombings, Dr. Stavas increased her efforts in preventing childhood violence and improving the health of urban communities. She is a mentor for Sole Train, a non-profit organization guiding inner-city youth on a path towards their full potential through running. She is also the medical advisor for the Appalachian Mountain Club, helping improve the health of children by getting them outside. Dr. Stavas’ work goes beyond borders-traveling to Haiti throughout the year, she provides medical care to children and helps strengthen the fragile medical infrastructure. A documentary featuring this work as a medical pioneer premiered at the 2014 South by Southwest film festival.

Dr. Stavas has written for multiple outlets including the Huffington Post, the Center for Disease Control, Self Magazine and the Medical Bag. She has been featured in Runners World, The New York Times, L.A. Times, The Boston Globe, The New Yorker, Time and People Magazine. Described as a healer, educator, and community leader she received the 2012 Change Maker award from The Boston Foundation.

Dr. Natalie Stavas is currently a physician at The Children’s Hospital of Philadelphia. Trained and educated at Harvard University, Natalie’s area of experience is in childhood trauma, decreasing youth violence and researching how we can better protect and serve high-risk children. She is pursuing fellowship training in Child Protection pediatrics and obtaining a Masters in Health Science and Public Policy at The University of Pennsylvania. She was recently named the wellbeing/work-life integration specialist for the Department of Pediatrics at the Children’s Hospital of Philadelphia

Keep an eye out for her upcoming book, Sole to Soul, about the transformative power that running has on high-risk youth, a simple solution to the complicated problem of childhood poverty and violence.

“Running Toward Chaos”
An avid runner, Natalie’s philosophy for success is, You Run Toward. This philosophy was never more apparent than on April 15, 2013. She had just run 26 miles and was about to finish the Boston Marathon when the bombs detonated at the finish line. Instead of turning around and running away with the crowd, she ran towards the chaos and saved four lives that day.

Natalie has been honored by President Obama, as well as featured on CNN, BBC, CBC, and Fox News. She has also appeared on the cover of Runner’s World Magazine and Sports Illustrated. Natalie Stavas attacks every obstacle with the same attitude: “You run towards that which you fear, that which challenges you, that which is oppositional.” Natalie speaks to audiences about her experience as a first responder and what ultimately led her to make that fateful decision to run into a terrorist attack.

“Thank you for agreeing to be with us at CASE IV. Your presentation was the most celebrated of the keynotes we had. I had more positive comments about your content, style, and delivery than I did for any of the other well-known keynoters involved. You made us think, you challenged us, you made us laugh and cry, and you left us reflecting and inspired to be our better selves. I feel honored to know you. I wish you continued success and happiness.”
Karl Miller, Executive Director of Development, The University of Texas at Austin

“Natalie Stavas delivered the Closing General Session at the AHCA/NCAL Independent Owners Conference held in San Diego, CA. In a word, she was inspirational. Dr. Stavas has a talent for delivering useful information that is also motivational. Her story of growing up in Kansas, continuing on to Harvard and running the Boston Marathon, provide wonderful examples of how we can live our best lives. Our participants raved about her presentation. It was the perfect end to our event.”
Christy Sharp, Senior Director, Member Relations, American Health Care Association

“Dr. Stavas delivers an uplifting, entertaining and powerful message. She demonstrates how chaos and fear can be harnessed to overcome any obstacle in horrific situations. She is a role model for all, and her personal journey and story are a great example of how through extraordinary human spirit and hard work anyone can achieve their goals. Her inspirational message is something that we all will benefit from for years to come. She would be a huge asset to ANY group who is looking for an amazing speaker.”
Brad E., Regional Director, EFM Events

“Dr. Stavas recently spoke to the attendees of the National Emergency Number Association’s Annual Conference and Expo. Dr. Stavas’ presentation was simply excellent and right on point for the audience. Her very well prepared presentation was highlighted by remarkable video segments that perfectly augment her comments. The standing ovation she received indicated that the powerful message and presentation were very well received by the attendees. She was a powerful contributor to the success of the conference.”
Brian Fontes, CEO, National Emergency Number Association 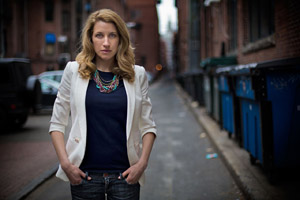