Curt Tomasevicz grew up in Shelby, Nebraska, a town of 707 people. While attending the University of Nebraska-Lincoln, Curt played running back and linebacker for the Huskers from 2000 to 2003, earning most of his playing time on special teams. Curt holds a bachelor’s and master’s degree in Electrical Engineering with a minor in Astrophysics, and a Ph.D. in Biological Engineering, all from UNL.

During his first season of bobsledding in 2004, Curt landed on the World Cup circuit, consistently pushing on the USA II sled. He made his first Olympics in 2006 in Torino, Italy, sliding to 6th place in the four-man competition. His biggest achievement came at the 2010 Olympics in Vancouver, Canada, when he and his team raced the Night Train to the first American four-man Olympic gold in 62 years.

In 2014, Curt participated in his 3rd Olympic Games in Sochi, Russia. The Night Train II team battled their way to a silver medal, making Curt one of only six American bobsledders in history to earn multiple Olympic medals. Curt’s team was featured on the March 2010 cover of Sports Illustrated. He has appeared on the Today Show, The Late Show and Tonight Show, and has thrown Major League first pitches, in addition to appearing in many other public opportunities locally and nationally.

“Have No Fear”
Curt Tomasevicz will share his story about how he went from a kid growing up in the small rural community of Shelby, Nebraska (population 707), to being on one of the biggest stages in the world…The Winter Olympics! He’ll discuss the hard work and determination it takes to not only participate, but to win two Olympic medals, and will also reflect on his time as a Nebraska Cornhusker football player.

Curt will encourage the audience to find the pathways to their own personal dreams and to Have No Fear while pursuing them!

“Barry and Tyler, just a note to say that Curt was an outstanding speaker at our Logan View High School Athletic Banquet! He has a compelling and authentic message that resonated with our audience. Curt is an incredible role model for achieving both athletic and academic excellence. I have received a great deal of positive feedback from our community regarding his presentation. I would recommend Curt and MidAmerica Speakers Bureau to any group looking for a speaker!”
Nate Larsen, Assistant Principal & Athletic Director, Logan View Public Schools

“Curt’s presentation was FANTASTIC with a capital F! He was a VERY personable guy with a great story. He was both funny and insightful all in one package! Curt took the time to sign autographs and pose for pictures, and he even spent time afterward on the show floor shaking hands and visiting with our members which they enjoyed. We definitely hit a home run in booking Curt! Thanks, MidAmerica Speakers Bureau…great choice!”
Cody Nuernberg, President, Northwestern Lumber Association

“Curt was INCREDIBLE! We loved him! So many people had so many nice comments…teachers told me they were moved to tears! He definitely hit a bases loaded, two outs, full count, home run in this small town this morning.”
Pat Rohrig, Secondary Educator & Youth, Leadership Advisor, Friend Public School

“Barry and Tyler, I just wanted to say what a fine job Curt Tomasevicz did at our sports night. All of the attendees came away very impressed with the way Curt handled himself and the sincerity he showed to everyone who attended the event. Curt’s speech was excellent and all the comments I received afterward were very positive. I had some people tell me that it was one of the best speeches they had heard in a long time. They were very impressed with the way Curt took the time to speak to everyone and how polite he was to everybody. Thank you again and we hope to work with you again next year!”
Brian Vosika, Boys Basketball Commissioner, St. Pius/St. Leo School

“Curtis was a smashing success at our KFOR Sportscasters Club Banquet! We had a full house and they were definitely into Curt’s presentation. He mentioned to the audience that he had been speaking at a lot of high schools, but did a marvelous job of adapting his message to an adult audience. Additionally, he was very accommodating afterward, posing for pictures and signing autographs. Of course, everyone was totally mesmerized by his gold medal! We were delighted it worked out for Curtis to be a part of our banquet. It turned out to be one of the best we’ve ever had!”
Chuck Stevens, KFOR Sports Director

“Curt was a wonderful speaker! Everyone just loved him. The adults and kids were buzzing through the weekend. They were showing pictures and talking to others that didn’t come and told them about what he said. He definitely left a HUGE impression on everyone. I know the kids are making collages with his pictures. Thank You, Barry and Tyler, for helping us get Curt to come to Prague. He was the BEST!!!!!!!”
Tina Paseka

“Curt Tomasevicz was very well received at our Frenchman Valley Coop Annual Meeting in Imperial! In fact, he was quite a ‘drawing card’ as we had the largest crowd in the past six years! I received many positive comments following Curt’s presentation. His story was different and fun for the group. Also, he was very open to meeting our audience for pictures and autographs both before and after the meeting. It was definitely a ‘feel-good’ night and Curt had a BIG part in making it happen! I will most definitely keep MidAmerica Speakers Bureau in mind for future events. They were great to work with in getting Curt to Imperial, Nebraska!”
Doug Ohlson, Frenchman Valley Coop

“Curt performed an AMAZING presentation at our school! He even held the kindergarten students’ attention for the entire hour! He was so engaging, you could have heard a pin drop! The word I heard most often was ‘Awesome!’ Comments I received from staff and students were, ‘He’s a small town Nebraska boy at heart, and someone we can relate to.’ They also liked how down-to-earth Curt is. The parents loved the message he had for the students about not forgetting where you came from, where you are, and where you’re going…and if you don’t like something…change it. The adult audience members agreed with his message that even if you come from a small town, you can still do huge things, even if it’s not as big as an Olympic Gold Medal. Curtis may have a gold medal in his pocket, but in our book here in Cambridge, he is worth his weight in gold!!”
Angie Hagedorn, School Nurse, Cambridge Public Schools

“Curt Tomasevicz was exceptional with the kids here at our camp and his approach was so interesting and entertaining…he truly embraced the audience. Also we appreciated the fact that he was so agreeable to signing autographs and posing for pictures. The kids wrote tons of questions and he responded to them with humor in language they could understand. Curt is a great Olympic athlete, but more than that, he’s a wonderful person! I would strongly recommend him to any group, and I am glad that we were able to make this happen.”
Gina Baker, CARE Representative, Boone County Health Camp

“Curt has a story that every high school and college athlete should hear! He has taken the values from his rural upbringing and carved out a path to academic, athletic, and eventually, Olympic success! Curt understands how to deliver his message, especially to young people. Our students were mesmerized by his story and were excited to meet and visit with him.”
Shaun Brothers, CAA, Athletics & Activities Director, Plattsmouth High School, Nebraska

“Curt Tomasevicz recently gave a presentation to our members during the Nebraska Grocery Industry Association Annual Conference. Curt is a well-versed individual with a strong leadership message. Our members thoroughly enjoyed his presentation and were thrilled when he stayed after to take photos and allow our members to see his Olympic Medals. What a refreshing gentleman! He was one of the highlights of our meeting!”
Kathy Siefken, Executive Director, Nebraska Grocery Industry Association 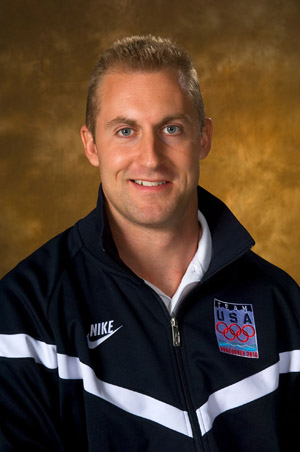