On Christmas Eve in 1968 the Astronauts of Apollo 8; Frank Borman, James Lovell and William Anders did what no other humans had ever done. Now, over 50 years ago, a turbulent world cast their eyes to the heavens for a unique view of our home planet. It was on this very night, when humans were able for the very first time in history, to see our planet Earth rise over the lunar horizon, that a small-town boy from Nebraska decided to pursue his life’s work of becoming a United States Astronaut, just a mere two months shy of his tenth birthday.

On that night in 1968 along with his family, Clayton Anderson’s eyes and ears were intently focused on a small black and white television set in the center of their Ashland, Nebraska living room, as they watched and listened to Commander Frank Borman, Command Module Pilot Jim Lovell and Lunar Module Pilot William Anders as they became the first humans to leave low-Earth orbit and become captured by the gravitational pull of the silent sentinel of our night sky.

This is the unique story of the passionate pursuit of a young man’s dream and his ability to persevere and overcome tremendous odds to represent his State and Country in the achievement of his destiny – to soar into the heavens as only a very privileged few have done. Clayton shares the stories of his life as an astronaut…from the very beginnings of his selection to this hallowed corps after 15 years of trying, to his 152-day adventure onboard the International Space Station and his final 15-day mission aboard the Space Shuttle Discovery.

You will be awed by the beauty of our planet Earth from 225 miles up, moved by the impact of a shuttle liftoff and inspired by the tragedy of the Columbia mission that never returned. You will learn how the values of teamwork, trust and faith can help in the struggles to maintain family cohesion in the midst of constant international travel and overcome the loss of loved ones in the midst of personal triumphs.

Clayton has spoken throughout the Midwest, the United States, and the world, sharing his story of perseverance, patience, and faith with audiences of all ages and from all walks of life. His message is delivered with humor and honesty and the personable style of a storyteller who once dreamed of the heavens and who believes that living life the right way can position oneself to achieve those dreams with no regrets.

“The Dream of a Lifetime”
Hop into the flight suit pocket of US Astronaut, Clayton Anderson, and learn about the journey of this small-town Nebraska boy who spent 167 days living and working in space. Anderson, who was “kicked to the curb” by NASA 14 times before his ultimate selection, went on to become a veteran spacewalker ranked 30th on the world’s list, with nearly 40 hours working in the vacuum of space over six spacewalks. Anderson’s story of humility, perseverance and hard work gives a unique personal perspective into his life and an openly human look at what it takes to be a successful “steely-eyed astronaut.” Entertaining and informative, Anderson will challenge attendees to examine how they may apply the same concepts to their everyday work and personal lives.

“Never a Commander, Always a Leader”
A two-time Shuttle and ISS Astronaut, logging over 167 days living and working in outer space, Anderson was never allowed the coveted slot of Mission Commander. Undaunted, and ever-determined, Anderson’s career reflects consistent leadership in all facets of his NASA career. Through the process of pursuing his lifelong dream of preparing to live and work in space, fertile ground is provided for developing and enhancing one’s personal management and leadership style. Through his unique on-orbit perspective, Anderson offers three simple leadership tenets that could prove helpful to you and your organization as you tackle your future successes!

“For the Beauty of the Earth”
Spending 152 days floating above our beautiful planet changes one’s “orbital” perspective of the spaceship we call Earth. Through photos taken during his expedition to the International Space Station (ISS), Anderson provides an entertaining and reflective discussion of life onboard the United States’ most complex technical achievement. Beginning by involving the audience in a “pseudo” game of Jeopardy and the category of “US and World Geography for $5000,” the presentation focuses on how this life-changing experience led to a strengthening of his personal faith.

“I Am an Astronaut, and I Am a Failure”
Appearing as an unsuccessful contestant on the new game show “Mental Samurai,” Anderson relates the idea of failure and its integral partnership with preparation and consequences. Having spent 167 days living and working on the International Space Station, Anderson knows something about preparation and the idea that in space – unlike a game show appearance – failure is often NOT an option!

Award-Winning – The Ordinary Spaceman: From Boyhood Dreams to Astronaut (University of Nebraska Press, 2015)
This book puts you in the flight suit of U.S. astronaut Clayton C. Anderson and takes you on the journey of this small-town boy from Nebraska who spent 167 days living and working on the International Space Station, including more than forty hours of spacewalks. Anderson gives an authentic view of the highs and the lows, the triumphs and the tragedies of life as a NASA astronaut. Buy Here

Award-Winning – A is for Astronaut: Blasting Through the Alphabet (Sleeping Bear Press, 2018), illustrated by Scott Brundage
Astronaut Clayton Anderson takes readers on an A-to-Z flight through the alphabet from astronaut and blastoff, to spacewalk and Zulu Time.  Topics cover the history of NASA, science, and practical aspects of being an astronaut using fun poems for each letter.  Topics are paired with longer expository text in the sidebars—perfect for science buffs, budding astronauts, and astronomy lovers of all ages. Buy Here

It’s a Question of Space: An Ordinary Astronaut’s Answers to Sometimes Extraordinary Questions (University of Nebraska Press, 2018)
Having spent over 150 days on his first tour of the International Space Station, it’s safe to say that Clayton C. Anderson knows a thing or two about space travel.  Now retired and affectionately known as “Astro Clay” by his many admirers on social media and the internet, Anderson has fielded thousands of questions over the years about spaceflight, living in space, and what it’s like to be an astronaut.  Written with honesty and razor-sharp wit, It’s a Question of Space gathers Anderson’s often humorous answers to these questions and more in a book that will beguile young adults and space buffs alike.  Covering topics as intriguing as walking in space, what astronauts are supposed to do when they see UFOs, and what role astronauts play in espionage, Anderson’s book is written in an accessible question-and-answer format that covers nearly all imaginable aspects of life in space.  From living in zero-gravity to going to the bathroom up there, It’s a Question of Space leaves no stone unturned in this witty firsthand account of life as an astronaut. Buy Here

“Clayton Anderson is as American as mom, baseball and apple pie. He is an outstanding motivational speaker, especially to a younger audience. He comes from small-town Nebraska and achieved his lifelong dream of becoming Nebraska’s first astronaut. His message is that you can do whatever you put your mind to as long as you work hard and never give up. I have seen him keep an entire school spellbound by his remarks as well as bring tears to the eyes of 500 adults after a keynote address. Clayton has strong family values, an incredible work ethic and despite his success in space has his feet firmly planted on the ground.”
Rod Bates, General Manager, Nebraska Educational Telecommunications

“We hired Clay Anderson to speak to a group of 200 BP new hire employees. Clay presented material from his career at NASA, addressing the value of personal and institutional courage and effectively relating the technical challenges faced by NASA and BP. He is articulate, enthusiastic, and thoroughly entertaining. He tailors his message to his audience and answers questions from the audience with a smile, good humor, and a touch of irreverence. Clay has been a pleasure to work with, and I would recommend his service to any organization.”
Aubrey Collie, BP Challenge Summit Co-Lead

“Astronaut Clayton Anderson spoke to over 1,000 of our members in October 2012 and was a success from start to finish. He is well-spoken, funny, educational, yet poignant and received a standing ovation at the conclusion of his talk. Clayton’s presentation appealed to all ages and gave the audience a clearer understanding of the life of a NASA astronaut. On a personal level, he was a delight to work with while in Omaha. Prompt, accommodating and fun to be with. He made my job as the lecture coordinator a breeze!”
Carrie May, Omaha Town Hall VP – Lecture Coordinator 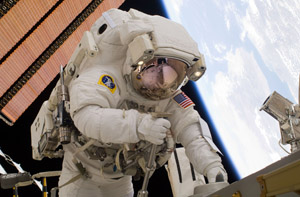