Attorney and Founder of the Team Jack Foundation

On April 22, 2011, Andy Hoffman’s life was turned completely upside down. Andy, a small-town attorney, along with his wife Brianna, who was head pharmacist at Atkinson’s West Holt Pharmacy, at the time, were about to embark on one of the most challenging journeys of their life. On this day, their son Jack would suffer a nearly fatal seizure, resulting in a lifesaving helicopter flight to Omaha. Weeks later, the family learned that what caused the seizure was a cancerous brain tumor.

Determined to see their son defeat the disease, Andy and his wife put their careers on hold and pursued treatment at the world’s most renowned pediatric brain tumor treatment center in the world–Boston Children’s Hospital.

On April 6, 2013, Jack Hoffman, while undergoing chemotherapy treatment for his brain tumor, was asked by the Nebraska Football team to play in the team’s annual Red-White Spring Scrimmage. Jack, dressed in a red jersey bearing his favorite player’s number – #22 – dashed 69-yards for a touchdown. The touchdown became a national news story overnight. The play also earned Jack the prestigious ESPY Award for 2013 Best Moment.

As a result of all of the blessings in Jack’s life, including “The Run” and his relationship with former Husker and current New England Patriots running back Rex Burkhead, in conjunction with his family’s passion for the cause, Jack’s story has been in the national media. As a result, Jack and his family have appeared and been interviewed live by several national outlets.

Andy has a very conversational speaking style. He focuses on entertaining his listeners while maintaining the humility that has defined the Team Jack movement. Andy does not fancy himself as a professional speaker. Instead, he is a father who is passionate about a disease that his son has, with a vast array of experiences. He is willing to share his passion for the disease and his family’s remarkable experiences.

“Drawing Inspiration”
Why giving up is never acceptable. Ever.

“Leaning on Your Faith in Christ”
“Team Jack-Pray”

“Greatest Hits”
The stories from inside the White House, the locker room, and the hospital.

“Light Yourself on Fire!”

“Our students and advisers in FCCLA District 8 really enjoyed hearing about the Hoffman’s story. Most of our students are familiar with Team Jack, but very few of them had ever heard the whole story. We also appreciated how Mr. Hoffman tied leadership to his story and the opportunities they have been afforded. It was inspiring to hear how one family from a small town in Nebraska is making a big difference on the national level. Thank you again for making it possible for Mr. Hoffman to speak at our leadership conference. We really appreciate you working with us so that our students could have the opportunity to hear his inspiring message! Thanks again!”
Angie Mann, District 8 FCCLA Co-Adviser 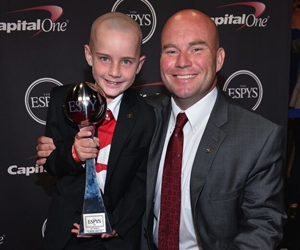