Mr. Beermann was born and raised on a farm in Dakota County, Nebraska. He is a graduate of South Sioux City High School (National Honor Society), and the Creighton University School of Law where he earned a Juris Doctorate Degree. He is a member of the Nebraska Bar Association, the Executive Director of NPA/NPAS; American Legion Post No. 3, Elks Lodge No. 80 and the Newcomen Society of North America. He is listed in Who’s Who Among American Colleges and Universities, Who’s Who in American Politics, 1971 Edition of Personalities of the West and Midwest, serves on the Board of Directors for the NebraskaLAND Foundation, member of the Board at Large Lincoln Foundation, served 14 years on Immanuel Medical Center Board in Omaha, Executive Board for Cornhusker Boy Scouts of America and is a retired Commissioned Officer (LTC) for the United States Army Reserve. He served on the Board of Directors People to People International, and served on the Advisory Panel-Federal Election Commission for 18 years, and is a member of Grace Lutheran Church. He served on the Board of Directors for the Nebraska State Patrol Foundation, Inc., and is the Past Chairman of the Nebraska Committee for Employer Support of the Guard and Reserve. He is a member of the Lincoln Downtown Rotary Club and was appointed by Governor Ben Nelson to serve as a Nebraska Diplomat.

College Alumni Achievement Award, recipient of an Honorary Doctorate from Midland Lutheran College, May 1995. He was awarded Honorary Life Membership in Nebraska Jaycees and has received the National Association of Secretaries of State Meritorious Service Medallion. He has received an Honorary Doctor of Laws from Midland Lutheran College in May of 1995. He was awarded the Exceptional Service Award from the Selective Service System, and Federal Voting Assistance Award by William Perry, Secretary of Defense. The Nebraska Diplomats in 2001 gave Beermann their highest honor – Ambassador Plenipotentiary. Also in 2001 the Republic of China, at a formal ceremony, presented Mr. Beermann with their Foreign Service Medallion. The first civilian recipient of the Homeland Defense Ribbon presented by Governor and Adjutant General. In 2005, the University of Nebraska presented to Beermann the “Outstanding Service to Journalism Award.” In 2006 Beermann was awarded the Ike Freidman Community’ Leadership Award from the Knights of AK-SAR-BEN, and in 2007 he was named Nebraskan of the Year by the combined Rotary clubs of Nebraska. In 2009, he received the All-American Journalist Award from Midland Lutheran College. He also became the Omaha Press Club’s Face on the Barroom Floor. In 2011, he received the highest award given by the state, the “Distinguished NEBRASKAlander Award”.

In 2018, Allen was honored by his peers by being inducted into the Nebraska Journalism Hall of Fame.

Mr. Beermann is married to the former Linda Dierking of Nebraska City, Nebraska. They have two sons, Matthew Allen and John William, and one grandson, Isacc Allen Beermann.

“The Guiding Principles in Service to Others”

“Allen Beermann is one of the most interesting Nebraskans I have ever met. He’s a dedicated Rotarian and knows people where ever he has his feet planted. An excellent communicator, he loves his state and conveys that love and concern to all those he meets.”
Ken Gnadt, Former Mayor of Grand Island

“Allen Beermann is not only incredibly knowledgeable on a variety of topics but employs an unmatched ability to effectively and powerfully communicate that knowledge to any audience. Entertaining, intriguing, and simply delightful, Mr. Beermann brings to the table a breadth of knowledge, true and honest character, and a passion and heart for all he does. He never ceases to amaze me in every way and I continue to learn from him every moment I’m in his company.”
Teresa Scanlan, Miss America 2011

“Mr. Beermann is a human repository of knowledge for “..all things Nebraskan.” As former Secretary of State, Mr. Beermann brings a network of both people and information to the fore, allowing him to share wonderful and powerful anecdotes, stories and information. His folksy style and personal demeanor make him a perfect choice for any arena, and he will provide audiences throughout the state with a powerful, satisfying and entertaining message.”
Clayton C. Anderson, U.S. Astronaut

“There is no question that Allen Beermann is the “Voice of Nebraska.” There is no one I would rather have speak to any audience than Allen, and without doubt, he can speak to any audience. With his command of knowledge, his soft approach, and his ability to communicate with beautiful simplicity, Allen draws in a crowd, captivating them far after his conclusion. An hour listening to Allen is like finding treasure that cannot be replaced!”
Howard W. Buffett, American Philanthropist & Businessman 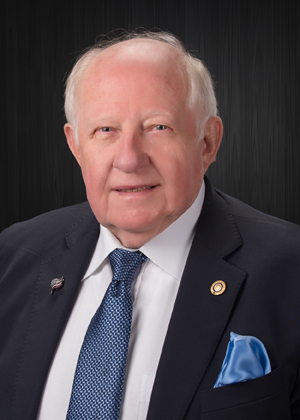